Pastor Marcia Mattoso, the founder and director of Hope Station, knows poverty. She grew up in Brazil, where every day was a challenge.  Her family worked but struggled to have enough to eat.  They didn’t have help from any nonprofit agency or the government. Her mother, father and a sister lived in a tiny 400 sq. ft. house – with one bed for all of them. Life was tremendously stressful!

Although difficult, through a series of miracles, Marci attained her Bachelor’s degree in Psychology and Theology.  She became an Associate Pastor in Brazil and then, in her late twenties, she had an opportunity to come to the United States to better prepare herself academically for a life of service.

She received her Master’s degree in Marriage and Family Therapy from George Fox University and worked as a marriage and family therapist for several years. Marci saw the many complex needs of people and became determined to help in a holistic way.  She went back to school and enrolled at Portland State to study non-profit management, gaining the necessary skills to set up an organization to meet the many needs in her community.

The internship of the Portland State program introduced Marci to Birch Community Services, Inc. (BCSI) in Portland, OR. where an excellently-run non-profit became the model for Hope Station.

In the Fall of 2008, 501(c)3 non-profit status was granted and Hope Station was positioned to serve. As a project that is focused on the community, Hope Station invited other churches and businesses to get involved. This included donating time, food, or monetary gifts.  Elsinore Framing and Fine Arts Gallery in downtown Salem sublet their 1500 sq. ft basement as the starting place.

After just five months, Hope Station outgrew their first location and moved into a 4,000 sq. ft. warehouse, housing both groceries and clothing.  Within it’s first sixteen months of operation, Hope Station had served hundreds of people and thousands of pounds of food had been given away. None of this could have been possible without the Lord’s blessings and hundreds of dedicated donors and volunteers.

Hope Station is striving to live up to its name! 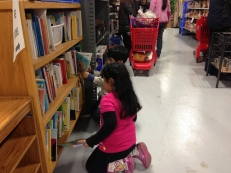